The Galra Empire is a massive inter-galactic empire featured as one of the most powerful political and military forces in the Dreamworks' series Voltron: Legendary Defender. Formely ruled by Zarkon, the Empire is divided into several zones under the control of several warlords, including Sendak. The Galra Empire also appears in the Non-Disney vs. DC Villains War as one of the prominent inter-galactic forces.

The Galra Empire is represented by Sendak and it's new addition, Grune. The two of them make a trade partnership with the mutants of Denebria, led by Flogg and Skeletor, acquiring the mysterious weapon, Thundrillium, for their own plots. In the later events, the empire gets attacked by Apokolips forces, comprised by Kalibak and the Black Beetle. Fortunately, it met resistance from Grune and Sendak, who managed to defeat Kalibak and kill Black Beetle. 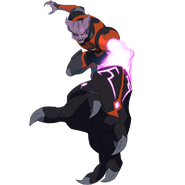