The Evil Mutants of Denebria are mutant species, located on the planet Denebria, and it's skull-shaped moon of the planet, Nordor. They are the main villains in The New Adventures of He-Man. While, the Mutants of Denebria play a minor role in the first part of Non Disney Villains Tournament, they appear as major competitors in the prequel and the third war of Disney vs. Non-Disney Villains.

Before the events of the first war, Flogg enlists the services of Gantu into his faction. To test him out, Flogg sends him on a mission to track down Krang. While Gantu proves enough, as he destroys Krang's defenses and some ninja soldiers, he is no match against the Shredder's, Krang's actual master, skills and Krang's super technology weapons. Gantu remains trapped in one of Krang's containment units.

A War of Mutants and Space Warlords

The Mutants's role is involved in the third part of the war, as they begin a new war against Zurg's weakened empire, after their previous battles with the Decepticons. When Flogg arrives on Planet Z, along with his huge army of mutants, he begins his assault on air, taking out several Hornets of Zurg. They then continue their assault on ground, as they come face to face with their enemies. Zurg's robot, however, disarms the mutants weapons. Slush Head, Hoove and Karatti then fight off with their brute force, their only weapon remaint. Zurg's robot, however, keeps them at bay. Flogg then uses his hand as whip-weapon, trying to kill the galactic overlord, himself. Despite his efforts, Zurg's rouckets, causes to Flogg to lose his concentration. Flogg and his men then retreat from Planet Z, Meanwhile, an overlord of evil, named Skeletor, appears from the shadows, after witnessing the whole fight of the mutants, and introduces himself to Flogg and his mutants. Skeletor sets a plan that they will assure the mutants victory. Flogg accepts Skeletor to his army, on the condition that he will remain be the leader of the mutants.

With the though of losing the Saurians, Flogg blames Skeletor for the failed invasion. However, Skeletor explains that the attack was just a test and that his next plan will assure their victory. Later, Skeletor goes to the next phase of his plans, as he explains to Flogg that now the time has come to attack. To do so, Skeletor enlists the female mutant, Crita, in his next goal.

Skeletor's put his plans in action, as he sends Flogg and his army, invading the base of the Heed, a galactic race of aliens, who at the same were negotiating with Zurg's envoy, Gravitina. At their arrival, the Mutant Ships blast some of the defenses of the Heed, warning the other Heed for battle. The Mutants then continue their assault on foot, as they fight off the Heed personally. The Heed find Skeletor and attempt to kill him, only for Skeletor to blast two aliens of Heed, knocking them down. Slush Head and Skeletor continue firing at the multiple aliens, destroying many of them. Crita then faces off Gravitina. Gravitina used her magic powers to break the ceiling high above Crita and drop the debris on her, knocking her off. Before Gravitina could finish her, Crita recovers and blasts Gravitina with a shot of her powers, causing Gravitina to lose control. Meanwhile, Skeletor reveals his trump card by activating a device. Shortly after it's activasion, the Mutants quickly flee from the base. Thinking that they had won, the Heed didn't notice that the device that Skeletor activates, was in fact an alarm bomb. Skeletor escapes, while the Heed and Gravitina are destroyed in the explosion.

Fears Amongst the Mutants

As the Mutants celebrate their victory over the Heed, Skeletor resumes in his original mission to find the Crystal of Darkness, on orders of Oberon. Skeletor takes along the way, the mutant, Quakke on the moon Nordor, where the Crystal is located. While impressed by the Crystal's powers, Quakke was afraid to see anything else, and makes an attempt to leave the moon. However, Skeletor uses Quakke as a test subject for the Crystal's powers. The Crystal boosted Quakke's strength to superhuman levels but at the cost of making him mad with power. Skeletor promised him more power if he worked with him and Quakke agreed. Later, Skeletor brings the powerfull Quakke into Flogg. Skeletor pressures Flogg to use the power of the Crystal so that it will super power the mutants. Witnessing the situation of Quakke, Flogg refuses to listen to Skeletor, claiming that the Crystal is too dangerous to handle with. Despite that short conversation. Skeletor reappears on the Moon Nordor to absorb a part of the Crystal of Darkness for himself, making him more powerfull ever.

It was not long enough when Hecate senses the Crystal's new location and rushes off to take it from Skeletor, so that she would please her master, Chernabog. At first Hecate fires at Skeletor, with magic of her own, only to be dodged by Skeletor. Skeletor then fires at one of Hecate's pet griffins, killing it instantly. Hecate then uses all of her powers to drain Skeletor's rising power, leaving him to revert into his previous state. An enraged Skeletor then fires at full force at the goddess, killing the Acolyte instantly. However, in his rage, he destroys also the Crystal of Darkness. The Crystal's destruction causes a strong light to engulf Skeletor and the entire cavern, strongly enough to destroy the moon, Nordor.

It is revealed that Skeletor survives the destruction of the planet, having consumed all of the Crystal's power and energy.

Later, the Mutants, along with the other remain galactic species, hold a space conference after the recent conflicts. Skeletor proposes an unexpected offer for peace. Skeletor and Flogg then appoint their new peace ambassador, Slush Head, though Skeletor gives a handshake with Slush Head, when Slush Head goes to shake hands with Flogg, Flogg responds by beating him with his own hand. Slush Head then addresses his speech to the space conference. When he forgets his own lines, Skeletor reminds him the lines, calling him at the same times "dummy". Slush Head exclaims his lines and also Skeletor's curse word in the crowd, leaving for the overlord to bang his head in his desk.

An Offer from an Energy Vampire

After the meeting was over, NOS-4-A2, a previous ally of Zurg, arrives on the space ship of Flogg, expressing his amusement towards Skeletor's speech. While Flogg was uncertain about the vampire's motives, Skeletor didn't notice about Flogg's attentions. The tides get turned, as NOS-4-A2 turns traitor against Zurg and requests to the Mutants that he will break the shields of Planet Z, so that he will take his revenge on Zurg, for humiliating him in the previous meeting.

The Battle at the Sky

With everything going according to plan, Skeletor and Flogg prepare the Mutants for the invasion on Planet Z. When NOS-4-A2 breaks the shields of the planet, Flogg rallies all of his mutant captains and troops to attack at once. With all of the mutants prepared for the attack, Flogg orders Staghorn to take the mutants on Planet Z. At the same time, Skeletor, along with his pet sidekick, Grr, questions Slush Head about finding any resistance in his current location. Slush Head then responds that no sight of a living person appears in sight of him. Skeletor then continues to speak, as he announces that Flogg will send the rest of the Mutant armanda, as soon as the shields of the planet are completely broken down. He also appoints that he wants to challenge Zurg and personally destroy him. As soon as the Mutants approach Zurg's central building, while being at the sky with their space ships, they encounter the defenders of the planet, the Hornets of Zurg and Warp Darkmatter. Slush Head manages to destroy several Hornets, with Crita laughing and mocking about them. Warp Darkmatter then fights back at the Mutants, retaliating them back. However, Flogg, Skeletor and his mutant troopers manage to land on Planet Z.

The Battle on the Ground

With the troopers in readiness, Flogg commands his forces to attack the emperor at once. Zurg has the Hornets to keep his foes at bay, only to be elimininated by the Mutant Trooper and Skeletor. Skeletor then confronts personally Zurg, as he sees him fleeing from the battle. A challenge then starts, as Zurg arms himself with a lightsaber. After a short fight, Skeletor manages to knock out his enemy. However, before he was about to destroy him, Zurg escapes through an escape pod, alongside Warp Darkmatter, from his own planet. Seizing the Planet Z at his command, Flogg orders his mutant army to search the entire space for Zurg and bring him arrested to him.

In this war, the Mutants of Denebria appear as part of Blackwolf's mutant army, with Flogg being Blackwolf's adopted son and top general among the mutants. Blackwolf instructs Flogg and his mutant army to strike their rebellion on Earth. However, the attack was interrupted soon enough by the arrival of Metal Sonic, a robot created by Doctor Robotnik, in the previous events. With his superhuman powers, Metal Sonic, knocks out Slush Head, Hoove and Karatti in a shift. Flogg then challenges the robot personally. Metal Sonic then evades away, so that Flogg will think that his rival is getting away. Soon enough, Metal Sonic charges at full power at Flogg, only to be stopped by the mutant's weapons. A devasted Metal Sonic makes an attempt to reach Flogg, only this time by blasted once more my the mutant's powers, into a fiery abyss. Before Metal Sonic would reach the surface, Flogg knocks him with a swing of his whip into the fiery abyss, destroying him.

Defeat of the Mutant Army

However, Flogg learns that his father, Blackwolf, has fallen, and decides to take the leadership of both the mutants of his own and his father. Fearing for his troops safety, Flogg makes a peace contract with Dolf and Snively, two of Blackwolf's previous allies. According to the terms of the contract, Flogg will surrender some of his territories to Dolf, as Dolf and Snively will keep their promise to to keep the mutants safe and sound.

The Mutants play an efficient role in the war, as they are guided by Flogg, and by extension Skeletor, on their battle against their opposed rivals, including Darkseid and his forces.

Flogg (Leader of the Mutants) 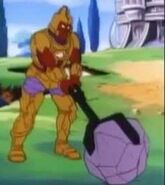 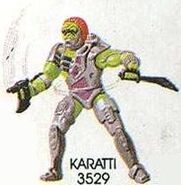 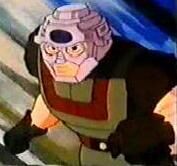 Skeletor (Recruit and Ally of Flogg)

Grr (Pet-Sidekick and a Minion of Skeletor)