Disney Versus Non-Disney Villains Wiki
Register
Don't have an account?
Sign In
Advertisement
in: Disney vs Non Disney Villains the Series, Titans, Monsters,
and 7 more

Eris' Titans, not confused with her minions, are the giants, summoned by Eris, to fight their opposal Titans of Hades. While the Titans are just fearsome creatures from other animated films, like "Sinbad, the Legend of the Seven Seas", or "the Last Unicorn", the term, "Titans of Eris", is fictional and only appears in the vilains tournaments, most specificially during the final events of Disney vs. Non-Disney Villains War.

The Titans of Eris

Before the Main Fight

Wanting vengeance against her former lover, Hades, the Goddess of Discord, Eris sought to destroy him, with some fearsome monsters. At first, Eris has her own, monster, Cetus, to attack the Jolly Roger, Captain Hook's ship, wanting to prove the monsters' strenght. In fact Cetus nearly succeeds on destroying much of Hook's ship and plummeting many pirates into the sea. However, Cetus meets his end, when Hook cuts the ship's mast, causing it to drop upon Cetus, stabbing in the head, much to the fury of Eris. Later, she manipulates Sharptooth and has him to kill one of Hades' monsters, Hydra. Shaprtooth succeeds, as the dinosaur crushes several boulders upon Hydra, causing the rocks to bury Hydra alive.

Battle of the Titans

When the time comes and Hades brings in the world the Titans, Eris unleashes her own Titans, included her pet, the Roc, the recent victor, Sharptooth, a ferocious monster, the Dragon and the Red Bull, once belonged to the deceased King Haggard. Before the Roc would attack, the Rock Titan crushes it with a giant boulder. The Dragon then avenges the Roc's death, by blasting two shots at the Rock, destroying it's heads. The Red Bull then charges at the Lava Titan, only for the Lava Titan to engulf the Red Bull, melting him in the process. Sharptooth then attacks the Wind Titan, only for Stratos to blow him up from a cliff to his apparent demise. With her Titans dead, Eris retreats from Hades. Off all the Titans of Eris, the Dragon is the only survival, as he doesn't appear or mentioned in the later events.

From A Goddess to a Titan

During the events of the Battle of the Undeworld, Eris assumes the form of the giant gollem creature, Mala Mala Jong, to deal once more and final time with Hades. At first Hades shoots at Eris, with few blasts from a trident, only to discover that the blasts didn't affect Eris at all. A berserked Goddess charge at Hades, only to be haulted by Chaos. In her rage, Eris destroys Chaos with a blast of her magic. Hades then ties Eris with many ropes. Even though Hades manage to hold Eris for a while, the Goddess manages to free herself, cutting the ropes with a magic sword. An enraged Eris speaks her final profany at her former lover. However, an ignited Hades blasts Eris into a coffin, ablazing and killing her in the process.

Cetus (Former Minion of Eris, Perished in a battle against Captain Hook)

The Roc (Formed Minion of Eris, Crushed by the Rock Titan)

The Dragon (Former Minion of Eris, Unknown Fate of Him) 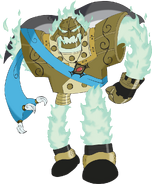