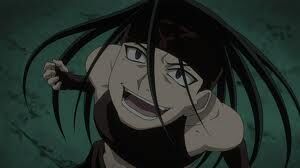 These are the forms that Envy had transformed into in various villains tournaments.