Duff Killigan is an irate Scottish golfer who often uses golf themed weaponry, commonly exploding golf balls, in his crimes; he is a secondary villain in the Disney animated television series, Kim Possible. Killigan is a secondary player in the second Disney vs Non Disney Villains War.

Duff Killigan was a student at Evile Academy. He was a star athlete on a golf scholarship. He didn't bother to study for Professor Technus's test. He later fled the Academy during the fire.

Owen hires Duff Killigan to eliminate Walker, a vigilante ghost who poses a threat to David Xanatos's interests. Killigan agrees and journeys to take on Walker. Walker's ghost guards prove easy pickings for Killigan's explosive golf balls, and the warden himself finds himself stunned from a few explosions. But Killigan's weaponry can only do so much against an ectoplasm powered ghost. One blast from Walker is able to destroy two of Killigan's golf clubs. Though Killigan is able to destroy Walker's hat with another exploding golf ball, this only delays the inevitable. Walker defeats Killigan with a blast of ectoplasm, though he does not kill his adversary.

Senor Senior Sr. calls together a faction of supervillains to investigate Fire Nation activity; Duff Killigan is among the alliance's numbers. Of all the alliance members, Duff is the only one not to engage an opponent. When Monkey Fist points this out, Killigan vainly asserts that he will kill one of Monkey Fist's enemies, Combustion Man. Ready to put his golf clubs where his mouth is, Duff tracks down Combustion Man and readies one of his explosive golf balls. Combustion Man and Killigan trade explosions, but both miss their marks. Killigan throws one of the golf balls into Combustion Man's third eye, stunning the firebender. He then strikes his opponent with a golf club. But Combustion Man gets up and stuns Duff with an explosion. Duff, knowing himself outmatched, flees. 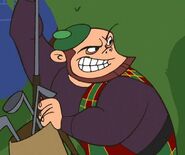 Duff Killigan in the anime

Duff Killigan appeared in Number One