Any of his bases

Kim Possible: A Sitch in Time

Dr. Drakken is a secondary player in both the first Disney Villains War and the second Disney vs Non Disney Villain War. Drakken, while a comedic villain in his regular television series, Kim Possible, often plays a far more serious role in the villain wars.

At the tender age of five, Drew P. Lipsky watched his father pack his bags and step inside the family station wagon. His teary eyed mother told him that he was on a buisness trip and would return within the month. Drew stopped asking when daddy would come home after a few years. It seemed to upset his mother each time.

Drew and his mother, before long, could no longer afford their house without the father's income and had to move in with Aunt and Uncle Lipsky and Cousin Eddy. Drew grew rather jaded by this childhood trauma. Resentment slowly grew into a lust for power.

Drew was graduating top of his class in High School, and was able to enroll in Evile Academy on a science scholarship. He thought this could be his first step towards world domination.

Drew settled in with two roomates; Heinrich Ibsen and Anton Sevarius. Heinrich and Drew got along pretty easily, but Anton found Drew annoying and immature.

Drew met fellow student Amy Hall through Anton. Drew wasn't crazy for Amy when they first met for their blind date at the bowling alley, but he grew to really like her as they talked over a basket of chili fries. Heinz Doofenschmirtz and Norton Nimnul were both at the alley as well, and decided to tease Amy (as they often did) about her affinity for stuffed animals and weight. Amy was visually upset, angering Drew, who snapped at Heinz and Norton, and dragged them out of the establishment by their long nose and curly hair respectively.

Amy was touched by the gesture. The next day, she affectonately gave Drew one of her favorite Cuddle Buddies, a cross between a kangaroo and a dragon, she said it was called a Drakken.

Not too long after this, Professor Technus assigned a particularly difficul test to his class that nearly the entire population flunked.

Technus lost his temper on the class. He stomped in and yelled at every student. What started as a scathing lecture quickly escalated into personal insults at each student. Technus's tirade caught Senor Senior's attention, who was teaching a class next door. Senior tried to calm Technus down, but Technus simply yelled at Senior as well, calling him an overly soft idiot.

Drew, angered that he had insulted his favorite teacher, stood up again. He hated to see people amused like his mother. Drew yelled at Technus.

Technus grabbed the nearest vile he could and spilled it on Drew's face, dying his skin bue. Drew tried to push Technus back, but the demented teacher reached for a scalpel and scarred Drew's face.

Sheila, another student, had enough of thsi by now. Sheila threw a blast of green plasma at Technus, knocking him into some lab equipment and killing him.

Technus's explosive death caused a huge fire in the college. The students ran off as it burned to the ground.

At the beginning of the war, David Xanatos entered the fray, looking for another scientist to aid his operations. Both Mojo Jojo and Dr. Drakken are considered, but Xanatos only has one spot available. It thus falls to a duel to the death to determine who gets the job. Mojo Jojo uses a machine to grow gargantuan, but Drakken responds by supercharging one of his own robots. While Jojo certainly possessed a size advantage, the greater arsenal of the robot proved too much for the monkey. Eventually, Mojo Jojo found himself crushed by a skyscraper, whilst Drakken eagerly took the position. After meeting Xanatos's aide, Demona, Drakken introduces his associate, Shego, to the group. Though Demona fails in her quest to defeat Skeletor, Shego briefly incapacitates Princess Azula of the Fire Nation, giving Drakken some personal pride.

After the Shredder defeats and jails Xanatos, Doctor Drakken and his associates are left distraught. Demona takes the opportunity to take over the alliance. Drakken proves disappointed in his new leader, as Demona displays resistance to any attempt to find Xanatos. However, Xanatos's wife, Fox, discovers his location: the Shredder's prison. She and Drakken resolve to break him out. Drakken and Shego set out to eliminate the Shredder's security system, but they encounter Hun and Baxter Stockman in the attempt. Shego takes on Stockman, while Drakken summons his Bebe robots to defeat Hun. Before the robots can leap into action, Hun destroys them with a tank. Stockman then scorches Drakken with a flamethrower in an attempt to kill Shego, though the doctor only suffers minor burns. After Shego defeats Stockman, Drakken wipes out Hun's tank with a PDA laser. The two de-activate the system, ensuring Xanatos's freedom.

Pressured by the Illuminati to take down Azula once and for all, Xanatos calls upon Drakken to assassinate the princess. Knowing he must breach the defenses of the Fire Nation, Drakken hires the alliance of Senor Senior Sr. They break into the compound and defeat the Fire Nation lieutenants, but Azula proves more formidable than any other threat. She very nearly incinerates Drakken and kills Shego. After his return home, Drakken assembles a massive funeral for his partner and friend.

In the Disney Villains War, Drakken heads out to assassinate his old rival, the Mad Doctor. He infiltrates the Mad Doctor's island base, but he and his Bebe robots are unprepared to face the Mad Doctor's skeletons. Drakken flees but ends up smashing the ceiling in a failed jetpack motion. This provides ample time for the Mad Doctor to tear him to pieces. 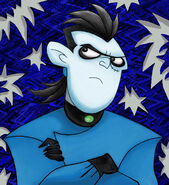 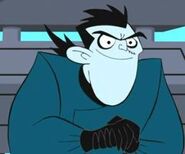 Dr. Drakken in the anime

Add a photo to this gallery
Retrieved from "https://villainstournament.fandom.com/wiki/Dr._Drakken?oldid=112985"
Community content is available under CC-BY-SA unless otherwise noted.