Doctor Doom, AKA Victor von Doom, is the primary antagonist of the Fantastic Four line of Marvel comics. An evil genius wielding various magical and technological abilities, Doctor Doom is widely considered to be the most intelligent villain in the Marvel universe. Doctor Doom is a major player in the Disney Vs Marvel Villains Wars.

When one of his Doombots brings news that Judge Claude Frollo has denounced him as a gypsy in public, Doctor Doom flies into a rage. Doctor Doom travels to France and interrupts the public execution of a gypsy. Armed with the Power Cosmic, Doom begins destroying buildings around the pyre. Frollo has his men try to shoot Doom out of the sky, but Doom lands and triggers the lava flows around Notre Dame. Doom looks on as Frollo is seemingly burned alive, while Frollo's soldiers run away in terror.

In the wake of his battle with Frollo, Doctor Doom travels to HYDRA Island and conquers it, defeating Baron Strucker and the Grim Reaper, subsequently naming himself the leader of HYDRA. Dr. Doom then forges an alliance with the alien refugee, Emperor Zurg. 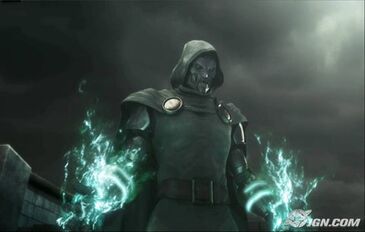 During one of Lex Luthor's reunion, Victor von Doom and Norman Osborn, thought they were essential to the company, are fired because not only because they make Luthor's company been overpassed by Cobra but also because they make way less benefits. Alone, Doom realize that the experiences he endured with Osborn can be a way for him to get revenge. Somewhere in New York, the son of the Devil, Blackheart, summon an old god on destruction, Gozer, on Earth, to spread chaos and warn everybody that Hell's forces are awakening. Doom, who is know dressed, comes across the traveler, and thinks it is a good way to test his new powers.