In Disney Villains War:1 (Against The Phantom Blot)

Doctor Doofenshmirtz is the main antagonist of the Disney animated television series, Phineas and Ferb. Doofenshmirtz is an incompetent scientist in every way: his inventions, or -inators, are comically impractical, he creates self-destruct buttons compulsively, and his motivations are petty at best, moronic at worst. As such, he is typically played for laughs in the villains wars, particularly the second Disney Vs Non Disney Villains War and the Animated v. Video Game Villains War.

Heinz Doofenschmirtz was a student at Evile Academy. He was best friends with Norton Nimnul.

Heinz and Norton were at a bowling alley where Drew Lipsky and Amy Hall were on a date. They decided to tease Amy (as they often did) about her affinity for stuffed animals and weight. Amy was visually upset, angering Drew, who snapped at Heinz and Norton, and dragged them out of the establishment by their long nose and curly hair, respectively. Heinz later fled the academy during the fire.

After the fall of Anton Sevarius, David Xanatos is in need of a new scientist. Doofenshmirtz volunteers for the position. Intrigued by the doctor's offer, Xanatos gives Doofenshmirtz a small group of Steel Clan robots, instructing him to acquire information on Destro's latest weapons. When Doofenshmirtz is discovered, he wastes not time revealing his robot reinforcements to Destro. The robotic gargoyles take out many of Destro's war machines, but they are eventually outnumbered and destroyed. Sadly for Destro, Doofenshmirtz escapes.

Doofenshmirtz does not tolerate being sent on a suicide mission; thus, he conspires with the Skeleton King to kill Xanatos. Doofenshmirtz and another scientist, Norton Nimnul, attack Xanatos's base, but come face to face with the criminal's latest discovery, Professor Ibsen. Ibsen creates some flying monkeys, but the two doctors wipe them out with their weapons. Doofenshmirtz calls in two mechanical dogs, but Ibsen creates a giant, mechanical hippo. The hippo knocks out the dogs and chases Doofenshmirtz out of the building. The doctor leaps from the window, falling to a pitiable demise.

Doofenshmirtz discovers that the Phantom Blot is a more respected and successful villain than he is. Enraged, he decides to deal with his adversary. The doctor actually manages to surprise the Blot by entering through the front door. The Phantom Blot threatens Doofenshmirtz with a laser. Yet Doofenshmirtz's stupidity ends up his saving grace; pushing a button that says "Do Not Push," he activates a laser that takes out the Phantom Blot. However, the button also triggers the base's self-destruct mechanism. Both end up killed in the explosion.

Teleporting Maleficent and her friends

Dr. Doofenshmirtz, hoping to gain some respect from other villains, visited The Forbidden Mountains where Hades, Jafar, Pete, and Maleficent were currently residing to show off his new invention: A dimensional portal. Impressed by the prospect of dimensional travel, but not by Doofenshmirtz himself, Maleficent sweet talked the doctor to give her the invention, he complied and the four villains all left and activated the machine, sending them into the video game realm.

Giving The Name Of The Team

Dr. Wily recruited Dr. Drakken and Dr. Pretorious into their group. Which Doofenshmirtz seemed fond of calling "The Scientist Syndicate".

Drakken introduced Shego to one of his new allies, Dr. Doofenshmirtz. But introductions were cut short when Bison entered the labs with henchmen and his robot. Doofenshmirtz and Drakken were too cowardly to fight, so it was up to Shego to defeat Bison and his minions.

After his victory against Cyril Sneer, Mr. Burns continued to expand his business empire. This caught the attention of Sneer's former business partner, Dr. Heinz Doofenshmirtz, CEO of Doofenshmirtz Evil Incorporated, who decided to eliminate Burns himself. Hearing of this and fearing for his life, Burns decided to contact an old business associate, Sheldon J. Plankton, and tasked him with getting rid of the troublesome doctor. Plankton agreed, and attacked Doofenshmirtz's headquarters in a robotic battle suit. Doofenshmirtz immediately used his building's security measures to briefly stun Plankton, allowing him to retreat to the roof, followed by Plankton. Doofenshmirtz then prepared a large ray gun, threatening to obliterate Plankton. However, Plankton decided to use a new tactic, launching out a small scout robot from his suit. This briefly distracted Doofenshmirtz, giving Plankton the opportunity to knock him off the roof, leaving the doctor to fall to his death.

Making his way through the metropolitan state of Danville, Mok arrived at Doofenshmirtz Evil Inc. to offer Dr. Heinz Doofenshmirtz an alliance.

Mok sent Holli Would out on an assignment to recruit some more allies.Before she left,Doofersmith fall in love with her.

Dr. Doofenshmirtz first appears in this war when he visits the infamous Dr. Gero to help him in his cause. The doctor was about to refuse to cooporate with Doof until he shows his latest invention: Bio Goku Android, a bio android created to serve him. Gero ultimately accepts the offer

Doofenshmirtz in the anime 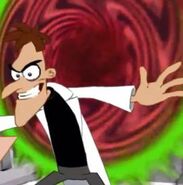 Doctor Doofenshmirtz in the universe CGI
Add a photo to this gallery
Retrieved from "https://villainstournament.fandom.com/wiki/Doctor_Doofenshmirtz?oldid=126231"
Community content is available under CC-BY-SA unless otherwise noted.