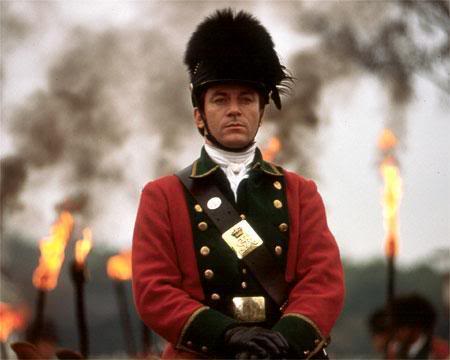 Colonel William Tavington is the primary antagonist of the American Revolutionary War film, The Patriot. A very loosely based adaptation of actual British General Banastre Tarleton, Tavington is a secondary player in the Non Disney Villains Tournament.

While visiting a London prison, Tavington encounters Lord Blackwood, who claims he will escape in order to fulfill a certain plan. Blackwood gives Tavington coordinates, so that they might have a duel once he escapes. Meeting on a bridge, the two clash blades. Blackwood draws a gun and severely wounds Tavington, who collapses. But this is all a ruse, as Tavington cuts through a rope that plunges Blackwood to his doom. As Blackwood hangs on to dear life from some chains, Tavington cuts the chains' holding mechanism; Blackwood falls and hangs.

Vs The Headless Horseman

Disgraced, Tavington joins the alliance of Saruman, Durza, and Queen Bavmorda. Replacing his hand is a silver hook, forcing him to adopt the identity of Captain Hook. The rest of his biography can be found here.

Retrieved from "https://villainstournament.fandom.com/wiki/Colonel_William_Tavington?oldid=79234"
Community content is available under CC-BY-SA unless otherwise noted.