Disney Versus Non-Disney Villains Wiki
Register
Don't have an account?
Sign In
in: Factions, Organization, Children of Oberon,
and 16 more

The Children of Oberon, also known as Oberon's children or the Third Race, is a race of gods, found in the television show of "Gargoyles". The race plays a major role in the villains wars.

Prior to the events of the war, the trickster Puck confronts a liquid like monster, wandering in the realm of Oberon. Thinking of the creature's potential, Puck enpowers the monster into a spirit, unknown to him, that he releases Hexxus, an ancient deadly demon, into the universe. Upon recieving strenght, Hexxus ablazes the whole field of the realm, causing Puck to turn against him. However, Puck's attacks did not hurt Hexxus, as the spirit knocks him off with powers of his own. In a final attempt, Puck seals the spirt of Hexxus into a tree, where he would slumber for many centuries.

The Weird Sisters, three Children of the Lord of Avalon, were under the employ of Hades. When the Gangreen Gang refuses to pay Hades for the powers they get from him to defeat Negaduck, the God of the Underworld sends the trio women to deal with them. Though the Sisters attempt to convince the Gang with reason, Ace, the leader of the gang, still refuses to pay and instead knocks the Sisters into a lale as a result. The Sisters then drain the Gang's powers, eliminating them one by one, with Ace being the last to be killed off.

On the other hand, Mirage hires one of the Children, Anansi, to deal with Skeletor and his warriors. Anansi sets off to Agrabah, where Skeletor was residing at the moment. However, Anansi confronts Skeletor's muscle warrior, the Beast Man. While Anansi has the first strike, as he knocks off the warrior, Beast Man summons a horde of jaguars to kill the spider-god. Anansi, however, traps the jaguars in his nets. The Beast Man then separates Anansi from his web, leaving him unable to move, as Tri-Klops summons a powerful amount of energy, killing the creature.

An Old Friend of Oberon Arrives

Searching answers for his previous defeat, Hordak travels to Avalon to meet one of his old friends, Oberon, asking him the person who lock him up in the previous war. Oberon responds not politely by destroying one of Hordak's evil hordes. Not taking this kindly, Hordak summons a barriage of boulders, ready to crash Oberon, only for the Lord of Avalon to stop the boulders in the midair. Hordak then shows his frightening image, that sends Oberon crashing into a wall. Frightened, Oberon reveals to Hordak that it was Maleficent, who imprisoned him to the realm of Despondos. Having been informed, Hordak leaves Avalon at once.

Defeat in the Underworld

When the Underworld gets attacked by the forces of Eris, the Weird Sisters stand up against then new threat. They manage to hault Skulker, however, they were no match against Ember, who transforms the trio into owls

Meanwhile on Avalon, sensing the dangerous threat of the rise of Chernabog to the living world, Oberon gathers his children, including his wife, Titania, and his servant, Puck, who at the time was Owen Burnett, and also several sorcerers and monsters from across the world, to explain that Chernabog is a dangerous threat to the living world. To end this, Oberon forms the society, known as the Anti-Acolytes to strike down Chernabog and it's followers and opposal rivals, the Acolytes.

The Battle on Bald Mountain

Oberon and his forces launch a full attack on Bald Mountain, almost killing every single member of the Acolytes. Puck's efficiency in the battle proves the assuring victory for the Anti-Acolytes, as he crushes Sage Odin in two flaming pillars, blasts out Devimon and obliterates some of the Dark Chi Warriors. On the other hand, Oberon starts his struggle with the wizard, Daolon Wong, only for Wong to stop Oberon with some of his magic spells. Titania then stands up and knocks the Acolyte away. A recovered and angered Oberon then returns in the battle. When Wong uses his magic to eliminate Oberon, the Lord of Avalon binds Wong with his own magic. Oberon then, along with the other Anti-Acolytes, contribute to the final destruction of the Crystal of Darkness, the gateway of freeing Chernabog into the living world.

However, it is turned out that the Crystal was not destroyed, but teleported into an unknown location. Wanting to destroy the Crystal, Oberon travels to the Live-Action Universe, in a new form, to recruit the defeated Skeletor, after his previous match with Maleficent, to his cause. He opens a portal to the Animated Universe, and takes Skeletor with him into the original universe. There, Oberon explains that Skeletor is not powerfull enough as he was in the past. He promises that he will make him powerful again, in exchange of bringing the Crystal of Darkness to him. Skeletor agrees and sets off to find the Crystal. In the meantime, Oberon finds the Weird Sisters, after their previous defeat in the Underworld, and reverting them into their previous states, he recruits them to his society. Fearing for the counterattack of the Acolytes, Oberon hires Banshee and Raven to deal with Stalker, the true leader of the Acolytes and Chernabog's loyal minion. When the duo fail, Oberon arrives himself to end the demon's life. With his powers, he crushes Stalker under a heavy cog. Leaving relieved from the fight, Oberon doesn't notice that Stalker's essence is still alive, unknown what adventures it would have.

The Death of a Child

Protested on being refused, Banshee decides to eliminate the last of the remain Acolytes, Daolon Wong, to please Oberon. However, she realises that Wong is more powerfull enough for her to take, as he freezes her and unfreezes her, with his magic, while at the same perfoming a musical number. Humiliated, Banshee takes the form of Cromm-Cruach to deal with the sorcerer. Despite her transformation into a master, Wong is still powerfull, as he kill the creature, with a powerfull blast of energy. The last remains of the Banshee is her soul, shrieking in fear, as she disappears into the void.

The Battle in Hell

After a certain chain of events, Oberon gathers his army in the doorsteps of Hell, hoping to kill the remain Acolytes. With Titania dealing with Forte, the Weird Sisters encounter Evil Lyn. Lyn trades a blow at the Sisters, though her attack was not powerfull enough for them to take. The Weird Sisters then summon energy blasts, at some boulders, that trigger a mechanism to fall upon Evil Lyn. Lyn, however, evades the boulders and uses her magic to tight the Sisters in a lighting rope, and then obliterates them inside of it. Oberon then finishes Evil Lyn, by throwing another boulder to her, crushing the fairy down. Meanwhile, Raven confronts the Acolyte, Daolon Wong. Wanting assistance to defeat the sorcerer, Raven awakes several beasts from a totem pole, while taking his gargoyle form at the same time. However, Wong easily destroys the wooden beasts, leaving Raven to deal with his enemy personally. Wong, however, stuns Raven with his magic, before he would summon a massive snake. The snake bites Raven, causing him to revert into his normal form. Raven is helpless, as the snake devours him alive.

At last, the final showdown of Oberon and Stalker begin. After they trade insults to each other, Oberon summons a wave, that surrounds the demon, only for Stalker to retaliate his attack, as he sends the wave back to Oberon and Titania, knocking both of them out. Stalker then raises two guns and fire at the fairy king, only for Oberon to deflect his attacks. Oberon then takes his weapons, though telekinesis, and melts them, before his eyes. Stalker then raises a harppon gun and shoots it to Oberon's chest, transformimg him into an eldery vessel, due to the fact that fairies are valnurable to iron. A furied Oberon then states that hurting him was the biggest mistake, Stalker did. Stalker then crashes the eldery Oberon to a wall. Stalker then exclaims his last farewell to the fairy king, as Chernabog moves on to finish him. Oberon then swears to Stalker that the darkness of Chernabog would also swallow him as well, before he would die in a fiery explosion by Chernabog's hellfire.

During the events of the first war, Hades requests the help of one of the Children of Oberon, Anubis, as he knew that the God's powers may defeat his new enemies. Anubis, however, has no interest in Hades' plans and refuses to his offer. Angered, Hades attempts to absorb the powers of Anubis for himself. However, Jackal, who watches the whole scene, takes Anubis powers, before Hades had the chance to take them back. Jackal easily humiliates Hades. However, Hades had an ace upon his sleeves, as he blew magic dust to Jackal, reverting him into his original self. As for Anubis state, his whereabouts, after the battle, remain unknown.

Rise of a Spirit

Later, the Dark Dragon wanders in the Underworld to find recruits for Mirage's army, stambling upon the child of Oberon, Banshee. The Dark Dragon then convinces the fairy to rebel against the Underworld's master, which currently run over by Doctor Facilier and his forces. Banshee agrees and heads off to confront the voodoo sorcerer. At her arrival, Banshee states her reason to Facilier, in which the doctor summons his shadow minions to take care of her. Banshee, however, blasts the with vocal blast. Banshee then turns on Faciler, only to be confronted by Facilier's bodyguards, Sa'Luk and Hoagy. While Sa'Luk prooves a difficult to deal with, she manages to subdue Hoagy for a while. However, a recovered Hoagy throws to her a magic tallisman, that sends her to parts unknown.

The Tragic Fate of Anansi

Anansi appears in this war, helping Zira and Nuka in their scheme to take out Kraven the Hunter, a recently mutant creature. While at first Anansi manages to approach Kraven and uses his web to capture him, Kraven makes his way out from his web and and knocks Anansi out of his web nest, killing him.

While Banshee herself doesn't appear in this tournament, her monster form, Cromm-Cruach, serves as one of the monsters forms of Queen Narissa, although she met her demise, when Baron Mordo knocks her out with two powerfull blasts, killing the creature.

The Children of Oberon:

Oberon (King of the Third Race)

Titania (Queen of the Third Race) 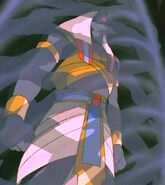