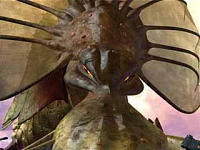 Cetus (also known as the Kraken) was a powerful sea monster who worked under the goddess Eris in the Disney vs. Non-Disney Villains war, appearing in the final battle.

He first appeared in the animated film Sinbad: Legend of the Seven Seas, again as one of Eris' monsters.

The Battle In The Sea

To test the creature's power over the seas so that he will be a perfect opponent for Hades, Eris sent Cetus (The Kraken) to cause chaos in the seas. When he first emerged from the sea, he watched Captain Hook's ship,the Jolly Roger, moving towards him. Seeing this as a great opportunity, the creature terrorised Captain Hook's Pirates and sent them flying inτο the ocean, he also damaged and destroyed much of the Captain Hook's ship. However he was no match against the captain's skills who quickly cut the ropes of the ship's mast and drop it above the creature's head, killing him in the process, much to Eris fury.

Retrieved from "https://villainstournament.fandom.com/wiki/Cetus_(The_Kraken)?oldid=110956"
Community content is available under CC-BY-SA unless otherwise noted.