Start a Wiki
CADMUS (often pronounched as Project CADMUS) is an organization, located in the Metropolis, known for it's genetic engineering, and it's cloning capabilities. First appearing in DC comic, Superman's Pal, Jimmy Olsen Vol 1 113, CADMUS has been regarded as one of the adversaries of Superman. The faction also appears in the Non-Disney vs. DC Villains War, though it's appearance is taken from the 2004 animated television series Justice League Unlimited. 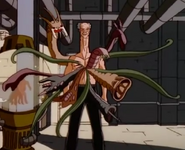 Retrieved from "https://villainstournament.fandom.com/wiki/Cadmus?oldid=95930"
Community content is available under CC-BY-SA unless otherwise noted.