The Brotherhood of Mutants is a faction of mutant villains led by Magneto in the Marvel comic book universe. The Brotherhood pslaysholeor role in the Disney Vs Marvel Villains War, though its individual members have stronger roles.

Initially, the Brotherhood comes under attack by Demona, who seeks the Grimorum Arcnorum in the brotherhood's possession. Most of the members are frightened away, with only the Scarlet Witch managing to keep Demona at bay. In the aftermath of this battle, Hades hires Avalanche to help his alliance. 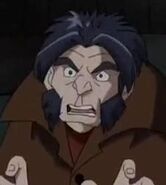