Bowser is the King of the Koopas, the arch-nemesis of Mario, and the main antagonist of the Super Mario Bros franchise. Bowser is a Koopa, a strange hybrid of a turtle, dinosaur, and a dragon. HIs hobbies generally include kidnapping Princess Peach and causing overall mayhem. Bowser is generally considered the most beloved villain in all of video games, according to Guinness World Book of Records and other sources. He has featured prominently in two spin-off tournaments, Animated vs. Video Game Villains War and Video Game Villains War and in Villains Battles he's was a menber of Pete's Alliance and the leader of his Alliance after his boss and Leader Pete leave the CGI World Bowser made his Alliance to continue Pete's Plans

After kidnapping Princess Peach yet again, Bowser decides to hire more troops. He turns to the forces of Gnasty Gnorc and Ripto, though the later is resistant to turning over his forces to Bowser's control. Bowser has his minion, Kamek, try to kill Ripto, but the shrimpy dinosaur counters the attack with an icy shield. Bowser uses his own fire breath to burn right through the shield. Ripto, in response, mutates himself into a larger form, even managing to stun the Koopa King. Bowser, enraged, summons a massive burst of energy and destroys Ripto's staff. The resulting explosion kills Ripto.

With Princess Peach thorougly captured and the Gnorcs under his control, Bowser takes up an alliance with Ganondorf. Ganondorf asks Bowser to eliminate the out of control Donkey Kong, a threat currently terrorizing the jungle. Bowser, along with two of his new minions, Crush and Gulp. Donkey Kong manages to kill both of Bowser's allies, but Bowser does manage to turn his foe into a trophy. Unfortunately, Bowser leaves it behind for Dr. Nefarious and GlaDOS to recover. Later on, after Ganondorf brings Dr. Eggman into the alliance, Bowser tries to bring Malefor into the fold, so long as the dragon can capture a princess. However, Malefor perishes at the claws of Alduin before Bowser can induct him into the faction. Instead, Bowser brings King K. Rool into the alliance. When Rool proves resistant to any real action, Bowser goads him into killing Baron Dante, a task which Rool is able to complete.

The Sorceress emerges as an assassin out to kill Bowser. Though the enchantress has the technical advantage, Bowser uses a Bullet Bill to stun her. Using a spiked bat, he manages to ward off many of her own magical attacks. While the Sorceress readies a final spell, Bowser uses his bat to strike the dinosaur magician right into the lava below. Bowser grins in satisfaction as his opponent melts into nothingness.

Long time ago before Mushroom Kingdom had been established, there was a world known as Subcon, a world where dreams were made. Subcon was ruled by the tyrannical wart and his nightmares, said to be the spawns of the Angel of Darkness. Only the mushroom people were brave enough to rebel against the Subcon's monsters. Wart was eventually overthrown and Subcon ended up changing into Mushroom Kingdom, whose residents believed that a peaceful era was at hand. However, Wart had a son, a reptile-like mutant said to be his heir. He quickly rose in the ranks of the Koopa Clan, a race of intelligent turtles who wanted to take over Mushroom Kingdom and drive away all other species. Their beloved ruler became known as King Koopa, and he soon gathered the former armies of Wart to join his side. He was even able to convince Goombas, who originally were on the side of Mushroom People, to betray their kingdom and join King Koopa's Legion.

King Koopa established himself very quickly as a threat to the Mushroom People, as his magic was too powerful, he had massive armies and he seemed to even surpass Wart in his power. Mushroom Kingdom's authority chose two humans from an alternate dimension to aid them in the battle against Koopa, two plumber brothers Mario and Luigi. Koopa had kidnapped the ruler of mushroom kingdom, Princess Peach Toadstool, and now was trying to force her into marrying him so he could gain control over the kingdom. Mario Brothers were able to stop Koopa and save the princess, but the war raged on, with King Koopa continuing to come up with new plans to destroy the Mario Brothers, only to be thwarted eachtime.

Sometime later, King Koopa was contacted by a giant brain known as Mother Brain and asked for his help in order to establish "Videoland Villains", Koopa agreed to the alliance as long as he could finally destroy those pesky plumbers.

Bowser in The Animated Universe 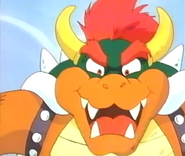 Bower in The Live Action Universe 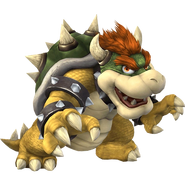 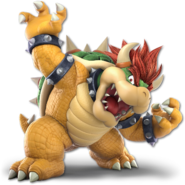 Bowser in Super Smash Bros. Ultimate
Add a photo to this gallery
Retrieved from "https://villainstournament.fandom.com/wiki/Bowser?oldid=123490"
Community content is available under CC-BY-SA unless otherwise noted.