Princess Aurora (sometimes known as "Sleeping Beauty") is the princess of an unnamed European kingdom who was cursed by Maleficent to fall into a death-like sleep on her sixteenth birthday. Though the heroic Prince Phillip and the fairies Flora, Fauna, and Merryweather saved her from this fate, Maleficent has returned and seeks revenge on Aurora in Disney Heroes vs. Villains.

Aurora in The House of Mouse 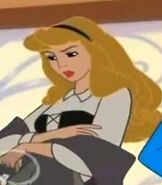 Add a photo to this gallery
Retrieved from "https://villainstournament.fandom.com/wiki/Aurora?oldid=118647"
Community content is available under CC-BY-SA unless otherwise noted.