Arukenimon is the Digimon created from the DNA of Oikawa Yukio. She is the second major villain that the Digidestined inb Season 2 come across. Arukenimon is a master of insects and has the ability to control insect type Digimon through the music of her flute, even able to control the Digidestined's Digimon like Stingmon and Digmon. She is a spider Digimon, but has the ability to take on a human female shape. This shape led the Digidestined to believe she was from the real world for a long time, until she was nearly defeated by them and revealed her true form to attack! She also has an attack called Spirit Needle that lets her remove a strand of her hair in order to transform a Control Spire into the shape and power of a Digimon. The more strands of hair she uses, the more control spires she can use, so the more powerful the Digimon. Mummymon rescued her when her defeat was close at hand by the Digidestined because he is madly in love with her. The two of them were responsible for the idea and implementation of creating a Digimon out of 100 Control Spires- BlackWarGreymon.  She serves Oikawa without question and shows up in the real world later in the series. Once there she kidnaps young children so Oikawa can implant the dark spore in them. MaloMyotismon destroys her near the end of the season. 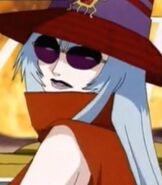 Add a photo to this gallery
Retrieved from "https://villainstournament.fandom.com/wiki/Arukenimon?oldid=47085"
Community content is available under CC-BY-SA unless otherwise noted.