The Archmage is a supposedly minor villain from the first Marvel Disney Villains War, and one of the major players in the second war. He is first featured as a major antagonist in the Disney television series, Gargoyles.

Regarding the villains tournaments, the Archmage takes the role of Destane, the father of Mozenrath in the television series, Aladdin.

Pre-War: The Search for the Eye of Odin

Prior to the events of the war, Destane spends his time in searching the Eye of Odin, an artifact that can boost his powers. He even uses the Huntsclan to search it for him. During one night, he calls the Huntsman and the Huntsgirl to his residence, the Land of the Black Sands, and questions them about their exploit. The Huntsman, furious for calling him for that excuse, responds that he would find it, but points out that calling him would not expedite the search for him. Mozenrath, Destane's pupil, then have the floor, as he volunteers to search the Eye of Odin by himself. The Archmage then points out that it is not the qualified job for him to collect it for him. When Mozenrath still continues to persuade him, taking the Eye of Odin, Destane silences him with few blasts. Destane then orders to the Huntsman to complete the achievement, if he wanted to share the rewards with him.

Later, the Archmage gets ambushed by the forces of Keldor, who arrive in his lair to take the Grimorum Arcanorum, an artifact currently in the Archmage's possession, for themselves. As Keldor sends his evil warriors to deal with the sorcerer, Destane equips himself with the magical spellbook to assist him in the battle. Using some of the spells of the book, the Archmage easily defeats Kronis and Tri-Klops. He then confronts Keldor himself. Although Keldor manages to disarm the sorcerer though his agility and swordmanship, the Archmage fights back, hitting his face with a skull bomb. The heavily injured Keldor is forced to retreat, along with his evil warriors. However, to Destane's surprise, Mozenrath betrays him as he casts him into a bottomless pit, though he somehow survives from the fall.

Having survived his fight with his apprentice, the Archmage spends his time as a hooden salesman, capable of collecting powerful artifacts. Soon enough, he meets the gargoyle Demona. Demona wants the Grimorum Aronorum, a powerful book of spells, for herself, but the Archmage isn't keep on giving dangerous magic, especially to Demona. Instead he sells to the gargoyle some some selected spells from the magic book, promising that he will give her the rest of the pages, should she make good use of them. Although Demona is proved enough, easily defeating Ebon, she is cursed by Puck, who transforms the gargoyle into human by day. The Archamge remains in hiding for the rest of the second war.

The Archmage is in possession of the Eye of Odin, a powerful magical artifact much desired by Loki. The trickster god arrives to steal it, but Archmage sees him coming and shoots him with a blast of magic. He continues to blast Loki with magic, but Loki responds with a far more powerful blast, knocking the Eye of Odin from the Archmage's brow. The Archmage screams in agony as Loki uses the Eye of Odin to transform him into a badge.

Some time in the future, the Archmage will travel back in time to observe his fight with Loki. After rewatching his defeat, the Archmage will travel to the present day Underworld and make a deal with Hades to revive himself after his own death Loki's hands (to avoid confusion, the Archmage from the future will be called Alpha Archmage while the one that has just been revived will be Beta Archmage). Alpha Archmage then uses the Phoenix gate to transport himself and the Beta Archmage to the Forbidden Mountains of one year ago (before part one started) and tell Maleficent about the Gates of Hell.Later,The Archmages meet back up with Hades and the Beta Archmage asks him if he wants revenge on Hela. Hades tells them that his priority is Olympus, not revenge, much to the Alpha Archmage's pleasure.

The Archmages observed the fight between the sisters weird and mordo baron, and they have returned to normal when you are turned into owls at mordo and recruited to the faction of Hades, the Archmages arrive at the battle of the forces of Hades against Enchantress and frightful four, beta Archmage kill Wizard and Trapster  while using alpha Archmage the gate of phoenix, to send to  enchantress to the dark dimension,The Archmages, looking for new canonfodder, pull Demona and Macbeth out of the time stream to serve them.

Acting Through The Subordinates

Archmage interference in the stream of time, has caught the attention of kang, the time traveler's future dictator, who seeks to repair the damage done by the Archmage, this sends Macbeth to destroy Kang, Kang's futuristic weapons and skills of macbeth are matched ,  but Macbeth manages to shoot and kill to Kang.

Alpha Archmage used the gate of phoenix used to pull the Lizardcurrent time and send the universe live action to prove the dangers there, the lizard is faced with Rumplestilskin, who uses his magic to turn the giant reptile in a human.But archmage beta gets the grimorum Arcanorum and sent to recover Demona the gate of phoenix for him.

Macbeth and Demona travel to Transylvania to retrieve the door for the Archmage phoenix, which is held by Miriam, the queen of the vampires, but Miriam escapes, attendees recover the amulet and the Archmages teach dark magic to the queen of hearts. Mozenrath reveals to Yzma that he managed to steal the Eye of Odin from Loki. However, the Archmage takes it from him to allow his younger self to become fully powered.

The Battle of Avalon

The Archmage sand using a version of himself to face Mordo's forces, who destroys the golem Archmage sand and reveals that it was only a distraction. Archmages convince the Avalanche-Venom to defeat Chernabog and inform about Hades and Maleficent escape Dormammu.

The Archmage Aurora and Anastasia takes to open the gates of hell and release Anubis, the horseman death itself, but comes Thanos (who wants to win the affection of death) and faces the Archmage, the masterminds seem tied, but Anubis disintegrates them both.

Events Before the War

While the Archmage himself didn't physically appear, he is mentioned by Ogthar, as he explains that it was him who sent his apprentice, Mozenrath, to kill Ogthar at the first place.

Events During the War

When Clavious and Zelda start to grow suspicious about Rothbart's and the Horned King's motives, a hooden figure arrives and proposes a secret alliance with the duo. Even though the identity of the hooden figure is not revealed yet, there is a possibility that he is the Archmage himself, as he exclaims one of his famous lines from the television show of Gargoyles, "My time suggests an alliance".

Unseen by anyone, a mysterious figure from another time arrives. As for who he is and what his motives are, both remain to be seen...

The Violator pledges his loyalty to Aku, who rewards the demonic clown for his aid by welcoming him into his inner circle. Unbeknownst to either of them, however, someone else is watching and preparing to make a move…

The Archmage escapes with his future counterpart, who prepares to make his next move. 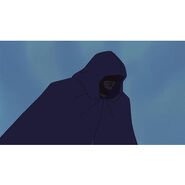 The Archmage's disguise in Heroes vs. Villains War

The Archmage's disguise in the second and third Disney vs. Non-Disney Villains War
Community content is available under CC-BY-SA unless otherwise noted.
Advertisement